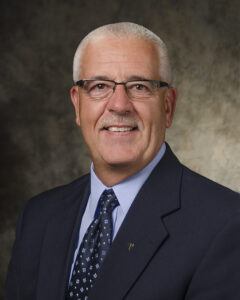 Chair, Board of Directors

“That’s probably the greatest thing, overall, what the foundation does. People here are committed to serving on behalf of others. I think it’s important to help and support others to get to a better place in life.”

Raised in Kokomo, Indiana, Randy White received his education at Indiana University where he studied Parks and Recreation Management. After school, he moved to Northeast Indiana to become the assistant manager at Pokagon State Park. In total, he worked there for 26 years, retiring as the park’s Property Manager. He and his wife raised their two children in the state park, living in a house next to the office.

After retiring, he was a visiting lecturer at the IU Eply Institute for Public and Park Lands, working with the National Parks Services. In 2005, he moved back to Angola and resumed adjunct teaching in the School of Business at Trine University. He worked in the administrative side at Trine for 12 years, and recently retired from his role the VP of Student Services and Dean of Students.

Randy is proud of is the role SCCF played in developing the Steuben County Fiber Network. He credits the founders with their forward-thinking and the solid foundation they created.

Randy truly believes in the overall mission of SCCF. There are many good projects and ideas that SCCF supports, and he thinks it’s important to inspire others to get involved as well. He personally contributes to this through serving as an example for volunteerism to the students at Trine and by encouraging faculty and staff teams at Trine to complete service hours. He thinks the strong leadership and complete buy-in of board members is what helps SCCF make such a great impact in the community.

Return to Meet the Team