Gage King, an Angola High School senior, has been named as the Steuben County 2021 Lilly Endowment Community Scholar. King will receive a four-year, full-tuition scholarship to an accredited public or private nonprofit college or university in Indiana, along with an annual $900 stipend for books and required equipment.

Lilly scholarships were first awarded in 1998, and more than 4,912 scholarships have been awarded statewide, not including 143 that will be awarded during this round.

King of Hamilton, IN, son of Brian and Shannon King, plans to pursue a career in business and entrepreneurship at DePauw University, Butler University, or Purdue University. In addition to being a three-sport athlete—football, basketball, and baseball—Gage is a member of the National Honor Society and Student Council at Angola High School.

A surprise announcement was given to Gage at the Steuben County Community Foundation. Gage was escorted to the foundation office by his uncle, Officer Brian Snyder, who told him a creative story using his law enforcement background that left Gage completely surprised to see the celebration. A limited number of family members were invited for the announcement. Protocols for gatherings, with social distancing and masks, were all followed.

At the announcement, Gage shared, “I was relieved and really surprised. Winning this means the world to me. It’s exciting to know that I can stay in-state and close to home. This opens up a lot of colleges I can attend.”

The selection process for the Lilly scholarship is comprised of four different parts evaluated by a volunteer committee. The process is pre-approved by the Independent Colleges of Indiana prior to the applications becoming available. The committee reviewed and scored the 14 applications received (with names and all personal information omitted) and selected six finalists based on academic and extra-curricular achievements in Steuben County. These six students then participated in an impromptu essay, portfolio presentation, and formal interview. The scores from these four components were added together to determine the top nominees.

The nominated candidates were then submitted to the Independent Colleges of Indiana (ICI) for selection of the scholarship recipient. The process of selection was followed as originally approved.

“Once again, there was an outstanding group of applicants from Steuben County.  Our committee of volunteers did a fantastic job with the selection process and we can’t thank them enough for their dedication,” said SCCF Program Officer Jacqui Gentile. “We also would like to congratulate the other five finalists, Hannah Conley, Areeba Kazi, Joel Knox, Mary “Katie” Smith, Madelyn Wylie, who will each receive a Circle of Friends scholarship from the Steuben County Community Foundation.”

ICI is a nonprofit corporation that represents 30 regionally accredited degree-granting, nonprofit, private colleges, and universities in the state. The scholarships are the result of a statewide Lilly Endowment initiative whose primary purposes are 1) to help raise the level of educational attainment in Indiana; 2) to increase awareness of the beneficial roles Indiana community foundations can play in their communities; and 3) to encourage and support the efforts of current and past Lilly Endowment Community Scholars to engage with each other and with Indiana business, governmental, educational, nonprofit and civic leaders to improve the quality of life in Indiana generally and in local communities throughout the state. The Lilly Endowment has provided over $424 million dollars for tuition and book stipends to date. 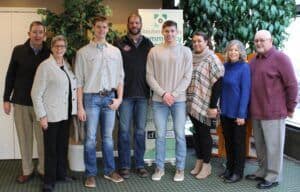