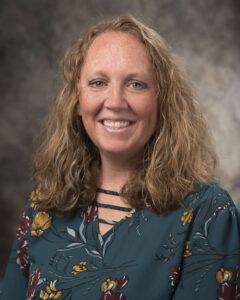 Treasurer, Board of Directors
Finance and Investment Committee

“This is a time in our lives where we are getting interested in what the community has to offer our children.”

Kayla Warren grew up in a small town near Lafayette and was introduced to Steuben County during her time at Trine University, then Tri-State, where she played basketball. After graduation, she worked in auditing and accounting in Fort Wayne, then fulfilled her goal of becoming a controller at a college when a position opened up at Trine. Kayla is now the Assistant Vice President of Finance.

Kayla and her husband, Noah, have two children and are involved in the YMCA and Angola Kids League. As their kids have grown up, raising a family in Steuben County has become more important. Kayla looks forward to bringing that perspective to the Steuben County Community Foundation board of directors.

Kayla shared that she enjoys Steuben County because it has a small-town feel, with just enough of the things you need. They like going around town and seeing the people they know, as well as the college town feel that was her initial exposure to the community of Angola.

During the summer, their family enjoys lake time and playing with their kids outside. Kayla and Noah often attend sporting events at Trine, a natural fit since her husband is the Head Men’s and Women’s golf coach.

Kayla was inspired to be philanthropic by her parents. Her mom was always volunteering for Kayla and her brother’s school activities, along with being a CASA volunteer and serving on their community park board. Likewise, her dad has served on their hometown volunteer fire department for 44 years. “He’s one of the most generous people I know,” said Kayla.

In addition to learning about additional opportunities for families to get involved in Steuben County, Kayla looks forward to getting to know leaders in the community and learning from their expertise and experiences. She also brings a strong financial background and auditing experience, along with a love for software and process improvement.

Return to Meet the Team